This attractive rock is found in the Eastern Goldfields area of Western Australia in a belt of ultramafic rocks that stretch from  Norseman in the south to near Wiluna in the north.   It occurs in many of the same locations as that of chrysoprase, most notably Yerilla , Marshall Pool & Goongarrie but in numerous other places as well.

It occurs as veins & plates but also commonly occurs in nodular form, quite often exceeding many tons in weight for a single nodule. Usually the interiors of these large nodules are of lighter colour & porous which makes them unsuitable for gem cutting.

Occasionally these nodules have a skin or rind of dark green chrysoprase which makes for a stunning display specimen. Pictured below is a 100 lb specimen I sold in Tucson a couple of years ago.

Another example of chrysoprase with a core of magnesite

Magnesite is magnesium carbonate and occurs as veins & nodules  and is an alteration product of serpentine and other magnesium rich rock types. This is produced by hydrothermal leaching of the magnesium from the serpentine.

In Western Australia most magnesite is white, however in certain locations the presence of nickel mineralisation is responsible for the pleasing green colour found in "citron chrysoprase". 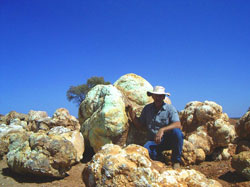